Gov. Christie is a very big disappointment to me. Yet more importantly alarms go off in my gut about the Republican Party!  The Dumicrats do not have this kind of disloyalty in their camp!

Conservatives, Libertarians, and Constitutionalists, are going to have to band together risking it all to save our great nation.  Our ancestors passed the torch to us to safeguard our liberties.  Our voice is not enough!  Our votes are not enough!  Our cooperating with Govt is not working!

ACTION! ACTION ACTION is desperately needed.  In world War II, we saw Japan and Germany attempt subjugation on all the worlds people.  Behind both curtains in both theaters of battle, we found not the average people behind the atrocities performed in that war, it was the politicians and their corrupt militarizes!  But mostly power hungry prostitutes, (politicians) selling their souls for absolute power.

Folks unless we unite underground and take this Omnipotent omnipresent Govt down, we will leave nothing for our Children and great Grandchildren but a country much like the city of Detroit is right now.  Along with the power hungry politicians lining their pockets with our country’s grand wealth.  It’s up to us people, let’s roll! 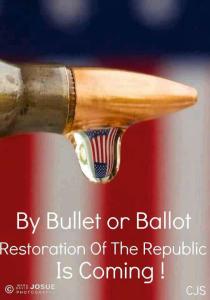 By Bullet or Ballet