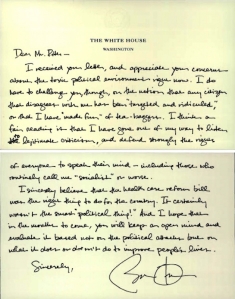 OBLAMER IN CHIEF, is what I refer to him as.  This man has know humiliation.  In all honestly, I believe the President is probably a sociopath, he is at best, mentally ill with anger from his past he never dealt with.  His father was a drunk killer, and his mother was obsessed with Liberal ideology.  You may not be aware of this, Obama‘s father was involved in an auto accident killing one person, he was drinking and driving at the time.

I mention that because it illustrates Obama has no moral father influence in his life, and the President often demonstrates no inner strength or ability to compensate for that deficit.  In fact, he has no inner strength PERIOD, he lacks logic, or any grip on any reality.  Now reality being your perception is true, yet most of The American Peoples reality is that our great American ship is sinking rapidly, and Oblamer is either not in touch with our reality, which is by and large true, or he is deliberately punishing us for his childhood trauma, coupled with his lack of conscience.

In any case, once you have read that letter 2 or 3 times, he clearly does not take responsibility for his actions.  As I have said before, in addition to his lack of responsibility, he lacks the ability to make a decision.  You will notice time after time again, Obama cannot make a decision.  I.E. when it was obvious that “The Health Care Act” was broken, then and there the majority of the American people knew what needed to be done, yet the President failed to act, or make that decision.  The Gulf Oil crisis comes to mind, it took him 9 days to address the nation, if I’m not mistaken, most of that time was dedicated to playing golf.

You must know by now, I am no fan of the President, nor was I a fan of Bill Clinton or F.D.R for that matter, yet those 2 men were ideologues tending to their Liberal agenda, Obama on the other hand, is a self centered narcissist, whose very mentally ill.  WE THE PEOPLE need to exercise our constitutional responsibilities through congress and impeach this man, or we will regret that we did not when we had the opportunity.