The America I Remember

Sen. Kamala Harris Cozies Up to the Base. But Will They Believe?

Time to lift the Rocks, then look closely underneath!

Sen. Kamala Harris Cozies Up to the Base. But Will They Believe?

HOW TO DRINK STARBUCKS….

Why isn’t Obama & Hillary calming the nation? After all these are their supporters. And the Left wing Democrats are complaining Trump & Republicans are the problem. Incidentally I don’t remember this kind of behavior from the Republicans when Obama & Clinton #1 became POTUS, & post their re-election, do you? The fact is the Democrats are the problem, and they always have been throughout their history from the beginning. Know Your History folks B4 it’s to late, you have a second chance here to get it right.

Folks, The GOP did not come through for the four murdered Americans #Benghazi today.  I honestly didn’t expect much, so I’m not VERY disappointed.

The GOP told the sociopath Hillary today, “there will be no re-match” DONE, enough is enough, if they went any further with this witch hunt,  then we would kiss the  #WH goodbye. I have been around long enough to know how the Clinton’s operate, this is their game and they are experts on how to play.

The checkered pants Repubs’ think they will out smart the fox, well now that is just plain Kaka.  The only way to beat the fox, is to shoot it.

Face it, like it or not, the front runner is obvious, #DonaldTrump, he is the only chance we have. Btw I like Cruz, I really do, if Donald Trump dropped off the face of the earth tomorrow, Cruz would certainly take his place in my eyes. Having said that, Cruz has no chance beating Hillary.  And I don’t know what kind of scenario would happen should Trump fall out.

Sober up America, unless Trump trips and falls hard, he is the front runner, and he has been from the beginning of his campaign. Trust me I’ve seen this before.  I haven’t seen this kind of support in the primaries since Ronald Reagan. If Trump is smart, and I believe that he is, Cruz should be his V.P. Now lets get behind TRUMP, and give him an overwhelming victory.  The only candidate that I think can out wit, out smart the fox, and get into the trenches with Clinton is Donald Trump.  Let’s put R.I.P. on Hillary’s forehead, the end of Hillary, and the Clinton error, “BRING IT”

“Hey, c’mon guys. Let’s get outta here and polish off a Miller High Life or two.”

Source: What The Benghazi Hearings Would Look Like If Bill Clinton Were Testifying

JUST ANOTHER THOUGHT ON ISIS RECRUITS

Moreover the next generation followed by the next generation of children of Islam are born and raised in this idealism fighting for a cause based on lies and deceit. It reminds me of the so called racial divide in this country. The Al Shrapnel’s, Jessie Jacksons, and the Charlie wrangles, just to name a few, spewing racism and how white people hate blacks. Do you think we have racial harmony as a result? The loons from these so called Civil Rights groups, looking out for the blacks in this country are no better, than the Terrorists of Islam, however there is a difference; Civil Rights leaders work the system both political power, and the press, mainly. Liberals embolden these people so they stay in power. Islamic Terrorists however take the Adolph Hitler approach, and attempt to wipe the people in the West off the earth. Frankly I don’t know which method is worse, kill us slowly, or kill us fast!

We have our own silent war going on right here in the U.S., in my opinion, has become worse subsequent the Civil Rights act, not better. Btw I’m older than the civil rights act of 1964, thereby I have some value to add to this subject. But all and all America needs to learn from its’ mistakes, such as the Civil Rights Bill of 1964 for example, and shine that on this Islamic State of mind, make no mistake that these 3rd world country Islamist’s people; live eat and breathe hatred for the west. The moment we lose site of that thought, or shortly thereafter, they will cease that opportunity to finish what they have started. 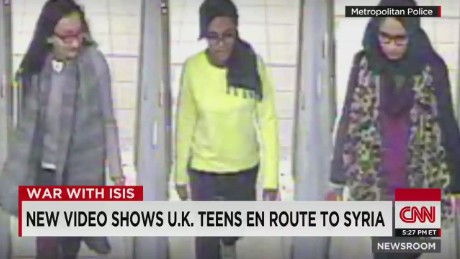 Convert to Islam they say.   Learn to kill for Islam!   ISIS will recruit anyone they can manipulate to kill on their behalf, anyone, anywhere.  Come join us!   Help us eliminate the West!

They recruit plenty of non-Islamics who say they will convert……and use them.    There are enough wackos out there that are easy prey.   Recruits are too easy to find for ISIS.   Then they will use them just like the children.   The women they recruit, they will self destruct after they’ve been raped numerous time.   Islamic children will stay in the brotherhood, grow up with it, it’s their way of life.   ISIS’ are heroes to many.   But oh what to do with the Europeans, and Westerners.     They are not one of them!   But they are a weapon, until they are of no use……….then off with their heads as well.  They want to kill us all.    Why can’t these wackos see that?    I guess because…

Good night. God Bless you all and your families. We are a great country, we always will be, thanks to our soldiers, our founders, and our firemen. The blood shed for this country runs in our veins, we are here bc of those people who gave the ultimate sacrifice, their lives. Remember that WE THE PEOPLE are the most powerful force on earth for peace and prosperity, we are powered by our creator. The loses on both 911s, and all wars we’ve fought only embolden us to be even stronger. I for one will never forget those people who fell off those buildings, or Ambassador Stevens brutally sodomized, beat and shot to death. They will always live in my humble heart until my last breathe.